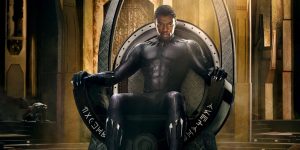 I, like many others, was anxiously waiting, since last year for the release of the much anticipated Black Panther. So as soon as it hits our shores, I couldn’t wait to go and check it out by myself. And I loved it for the following reasons:

I think Black Panther created such a big buzz for mainly this reason: representation. Black Panther is to me, essentially a movie created on African-American growing need for representation. Indeed, it has been released at a time where there is so much discussions about race, diversity and representation in the US and in Hollywood: Black lives Matter, women speaking out against gender discrimination, sexual harassment (#MeToo) and bias. Non-whites actors speaking up about discrimination and being paid lower than their white counterparts. It also arrives at a times where actors and movies makers, previously invisible are making great strides in the industry. Indeed some of the hit series of the past years have been led by Black women, in front and behind the camera, for instance, Shonda Rhyme’s Scandal and How to get away with murder with respectively lead actresses Kerry Washington and… . I strongly believe that time was ripe for a block buster with a complete black cast challenging the idea that black movies aren’t mainstream and need to be confined to some obscure the ghettos’ theatres. Black Panther is currently the number 1 movie worldwide proving that including more diversity in Hollywood is a welcome change.

Black Panther success was also made possible thanks to the trend that appeared on social media a couple of years ago: Melanin magic. In case you have been living under a rock, there is a huge movement that is encouraging black people to promote their heritage: Melanin Monday, Black girls magic, I love being Black, Dashiki pride are just few of the trending hashtag. Internet has given a voice to those previously ignored or silenced by mainstream media. People of African descent worldwide are celebrating their common and unique heritage and I feel like Black Panther success was made possible, thanks to this narrative gaining momentum worldwide: a 99 % black cast, actors from Africa and the diasora, the outfits, the hairstyle, and all the dark chocolate skins could have never happened 10 years ago and I’m happy we have finally reach this stage.

The beauty of Africa lies in its diversity. The movie contains so many references to different great African civilizations, cultures and people and this is an absolute visual joy:  The people of Wakanda are draped in the beautiful blanket of the Basotho people, from Lesotho a mountainous kingdom landlocked in South Africa. The Dora Milaje, the fierce and all females army of Wakanda outfits and beading was inspired by the Masai people, according to the film’s costumes designers.  But many, including me, also saw the concept of an all-female warriors as inspired by the Amazons of Dahomey, a 4000 women only army ancient Benin, West Africa.  Tshalla’s mom, the queen outfit is inspired by the Zulus’ married woman outfit. This is for the obvious. But throughout the movie, they are even more references. I for instance saw a lot of similarities between Wakanda and the representation of the ancient city of Timbuktu.  Also, The door of the apartment in the first scene, in the L.A, where the previous king of Wakanda (Tshalla’s father) appeared, is decorated with the Kasai carpet (also known as the Kuba carpet), a distinct decorative carpet from the people of Kasai in Democratic republic different of Congo.

And this is what made me love the movie. The sartorialist element of this moving is too beautiful to be ignored and is adding such a plus value to the movie.

Click Here to read the 4th reason why I have loved the movie !